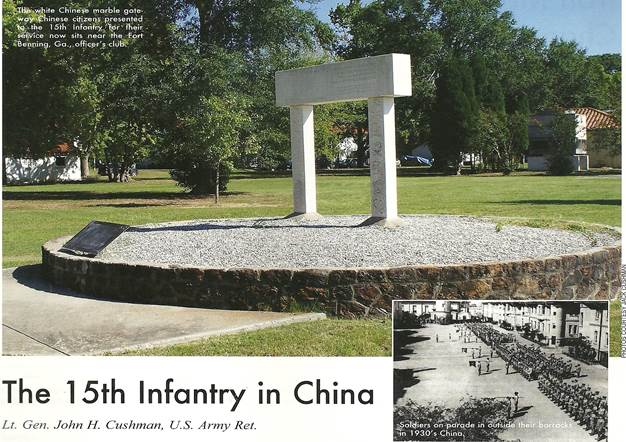 In 1921, my father received orders assigning him to U.S. 15th infantry which was based in Tientsin on the South China Sea, 90 miles from Peking. A few months after Capt. Cushman and his bride joined it, I was born into the regiment.

Since the mid-19th century, European powers had been in China with extraterritorial concessions wrung from the weak Manchu dynasty. The Boxer Rebellion of 1900 had brought an eight-nation allied force into Peking to restore Manchu rule. The Boxer Protocols, signed by the Chinese and by Western powers and japan, provided for foreign continents to be stationed, among other places, in Tientsin.

A decade later the Chinese revolution led by Germany in the first World War.

Regimental life, including its off-duty and social aspects, made China in those days a very attractive assignment. Life was goof for all ranks. The regiment's families lived in comfortable homes in the Western quarter. Each had a nurse (amah) for their young child or children, a cook, a number one boy, and possibly for American dollars. At three-month intervals Army transports brought in replacements, took away those returning to the States, and delivered potatoes and other food supplies. Game, fowl, and eggs were plentiful locally.

I have been in touch with Frank Eaton, a soldier in the 15th Infantry from 1932-33. He relates: "I lived in a barracks upstairs in a six man room. On the first floor of these barracks there were 48-man rooms. Each soldier had an army cot, a footlocker, and a shelf by his cot under which was a lone pole on which he could hang his uniforms. As soon as we arrived in China wearing uniforms with a high choke collar and wrap leggings, we were measured for a new-style uniforms with regular pants and a blouse with an open collar with which we wore a white shirt and black tie and low-quarter shoes. For 75 cents a month out of our $21 pay, we had Chinese men in the barracks who did all kinds of things for us to include sweeping and mopping our floors, cleaning our washrooms and latrines, shining our shoes, polishing our leather and brass. We were supposed to clean our own rifles, but they often did that for us too.

"The 75 cents also covered a barber shop where we could get a shave every morning and a haircut once a week. There was no reveille formation. The work day began with breakfast, and after that a formation for drill call, when there were classes, or a road march. The afternoons were for various outguards, and to accompany railway trains to protect American interests. Fortunately, the 15th Infantry soldiers were never required to fire a shot; in every confrontation the warlord's force, while occasionally threatening, backed away.

Beginning in 1926, the mission of the 15th Infantry as protector of American interests became increasingly untenable, as Chiang Kai-shek, Mao Tse-tung and then the Japanese entered the contest. Japan eventually took over all of Manchurian and controlled areas near Peking and Tientsin.

On July 7, 1937, Japanese troops attacked the Chinese defending the Marco Polo bridge just outside f Peking. The Japanese marched into Peking July 28; Tientsin fell the next day, and Shanghai in November. It was time for the 15th Infantry to leave Chinese, which it did March 2, 1938, leaving its compound in the hands of U.S. Marines from the Peking legation and bordering the U.S. Army Transport Grant, bound for Fort Lewis, Washington.

On the grass near the officers club at Fort Benning, Georgia, there stands a stone gateway of marble. Chinese citizens from Tientsin's Sun Yat-sen overthrew the Empire; China, still weak, was now a republic. Warlords, each with their own armies, fought each other for power. As chaos interfered with commerce, foreign contingents were reinforced. In 1912 the 15th Infantry Regiment, leaving one battalion behind in the Philippines, deployed from Fort Douglas, Utah, to Tientsin.

Tientsin in the 1920s, population 1 million, was a thriving port. With its British, French, Italian, and Japanese concessions, it was an international city with a Sikh police force. There was no American territorial concession; American Forces in China, commanded by a brigadier general, had its headquarters in a compound in the British sector. Its 15th Infantry was in barracks taken over from details, or athletics. Each company had teams-baseball, football- and there were regimental teams that competed with teams from other country's troops.

"Our mess hall was in the basement, with Chinese doing all the KP and much of the cooking. The troops ate very well. It was the life of Riley for a soldier."

In the early 1920s warlords ruled various regions of China, collecting taxes, raising armies, and competing for power. Two warlords became allies defending against a third, in a full-scale civil war. An uneasy truce in late 1924 began a period in which all three warlords maneuvered their forces to gain advantage.

This competition often made it necessary for the units of the 15th Infantry to patrol, deploy white Chinese marble. Chinese citizens from Tientsin's surrounding towns and villages had presented it to the regiment in April 1925, after a truce had ended the civil war. When the regiment reported to Fort Lewis, its commander, Col. Joseph A. McAndrew, presented the gateway to the Infantry School and had it shipped.

An engraved inscription says that it was intended as "A Remembrance of the Golden Deed done by Officers and men of the United States Army Forces in China during the Civil Strife, 1924." The text ends with a poem etched in Chinese characters, together with an English translation:

The sons of Uncle Sam so gallant in their deed Day and night so strict events tool greatest heed And through their strenuous effort and the suffering Peace among us all was kept and maintained ... and the villagers wished to accord "Honor to those to whom honor is due."