This issue of Business and Public Administration Studies (BPAS) of the Washington Institute of China Studies (WICS) – overdue by more than a year – comes at the crossroads of numerous events at turbulent times.  Since early 2012, when Dr. Bernard Pitsvada (1933-2014) retired as President and Editor of the Washington Institute of China Studies, the Institute and the Journal have undergone a difficult period of transition. A newly appointed editor (a professor from the American University) suddenly got sick and this interrupted a smooth transition and resulted in an unexpected delay in publishing the Journal. The subsequent search for another editor took much longer than expected.  The Journal of the Washington Institute of China Studies Volume 7 was last published in 2012. No issues were published during 2013 and the first half of 2014.

This current issue, Volume 8, Number 1, represents our express efforts to keep Dr. Pitsvada’s legacy alive. We are committed to exploring a deeper relationship between business and public administration. We want to assess and espouse these linkages in a comprehensive way for the benefit of policy makers, students, and the academic community at large. We live in a fast-paced, ever-changing and increasingly complex and globalized world where ideas have consequences. The selection of articles presented in the current issue testifies to that.

After numerous discussions and brainstorming with the newly appointed Board we decided to call this Journal: Business and Public Administration Studies. Though a new and broader title, the Journal remains that of the Washington Institute of China Studies. We will continue to solicit cutting-edge research and invite critical debate. We invite your active and constructive discussion and dialogue. This year our goal is to publish the current Summer (June) and Autumn (October) issues. In 2015, we will segue into a regular quarterly journal, as was published originally.

In the spirit of the Founding Editor, Dr. Pitsvada, the mission and vision of the Journal remains as: “an educational forum to improve East-West understanding for a peaceful coexistence”. We wish to keep this legacy and continue to contribute to better understanding of global culture, business, and society. In our turbulent age, dominated by the Internet’s sound bites and instant media, the notions of business and public administration more and more are taken to imply entrepreneurship and government. Thus, it is necessary to distinguish in order to discern. That was the dream and standard established by Dr. Pitsvada, who tirelessly served as Editor and President of WICS from 2001 until 2012.

In 2004, Dr. Pitsvada asked me to join the Board of the Washington Institute of China Studies. Almost a decade later, in 2013, he decided to step down. He published a journal that attracted scholars, students, public administrators and policy makers.  He was a visionary leader tirelessly working toward solid dialogue, understanding, and peaceful, mutual coexistence.  I once asked him if that was not too abstract and lofty a goal. He told me that the best way to live in harmony is through good communication, while respecting one another. It can be done only through the open exchange of ideas and working constantly at it.  He left us with this vision and the WICS will adhere to his legacy. Since I could not carry on his mission alone, I have asked for help from two fellow academicians who are joining WICS as co-editors: Dr. Slawomir Wawak, from the Cracow University of Economics in Poland, and Dr. Zhiyong Lan from Arizona State University and Renmin University in the People’s Republic of China. Our new Treasurer as well as a continuing Board Member is Charles Bingman, a retired professor of the George Washington University and Johns Hopkins University. We will expand our Board in due time. We want to be better empowered to continue the legacy, while building a virtual readership, relevant discussions, and a forum on vital, global issues.  We will endeavor to work on the vision: to work for peace through education and constructive dialogue.

We encourage you to publish in Business and Public Administration Studies. Please note the diagram below, which depicts the publication process of articles from submission through publication to indexing.

We hope you enjoy reading a set of cross-disciplinary articles. Also, we expect that you will voice your opinions and send in your comments to: office@bpastudies.org and help make the Journal a lively forum for the discussion of vital ideas. 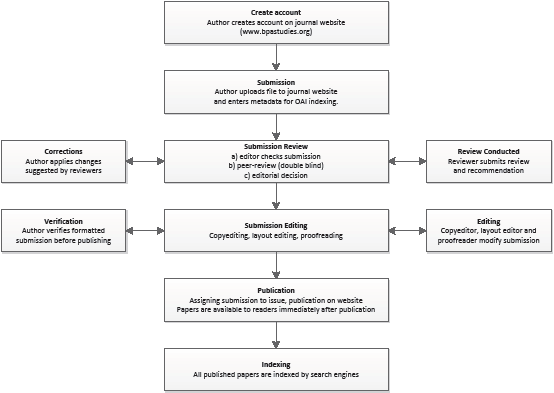