The Impact of Logistics Costs on the Economic
Development: The Case of Thailand

With exports accounting for more than two thirds of its gross domestic product (GDP), Thailand is heavily export­dependent. As a result, the importance of the logistics systems to Thai economy can never be overstated.

Recently, the National Economic and Social Development Board (NESDB), the Thai government’s planning agency, has set a five­year target to lower logistics costs from 19 percent of GDP to 15­16 percent by the end of the 11th national economic and social development plan in 2016. In order to accomplish this ambitious goal, the Thai government has approved a plan to expand the rail network and add high­speed trains. The cost for this rail infrastructure overhaul is enormous, with the total budget projected to be 1.7 trillion baht1. This investment program includes upgrading 660 kilometers of existing track and signaling infrastructure, buying more locomotives, and constructing five double­track routes to the northern, northeastern and southern regions. Can this investment program be economically justified? What shall we do to reduce the logistics costs in Thailand? We’ll examine these two questions by analyzing the nature and structure of logistics costs.

2. The impacts of logistics costs on the economic development

2.1 Logistics industry is a huge industry in Thailand

With a favorable geographical position in Asia, Thailand has aspired to become ASEAN’s logistics hub. The logistics industry is a huge industry in Thailand, and the NESDB estimated it had a potential to generate about 300 billion baht added value to the economy each year.

2.2 Logistics costs have large impacts on the scale of the economy

Logistics costs and trade costs are closely related. According to James Anderson (Anderson, Wincoop, 2004), trade costs include all costs incurred in getting a good to a final user other than the marginal cost of producing the good itself, such as transportation costs (both freight costs and time costs), policy barriers (tariffs and non­tariff barriers), information costs, contract enforcement costs, costs associated with the use of different currencies, legal and regulatory costs, and local distribution costs (wholesale and retail). Among the many components of trade costs, transportation costs are undoubtedly logistics costs, while some other costs like local distribution costs are partially logistics costs. Therefore, there should be a positive correlation between logistics costs and trade costs. The impacts of the trade costs on the economy in general and on the volume of trade in particular are well researched. It is estimated that 10 % increase in transport costs reduces trade volume by 20 % and doubling shipping costs slows GDP growth by 0.5 % (Limao Nuno, Anthony J. Venables , 2001).

From a micro­economic perspective, the cost­effectiveness of logistics can have a major bearing on a firm’s decisions about which country to locate in, which suppliers to buy from, and which consumer markets to enter. From a macro­economic perspective, high logistics costs to GDP are a barrier to trade and foreign direct investment (FDI), and thus to economic growth. Countries with higher overall logistics costs are more likely to miss the opportunities of globalization.

The level of logistics costs is heavily dependent on the industry, and tends to be high in logistics­intensive operations such as food, metal, chemical and paper manufacturing (Farahani, Asgari & Davarzani, 2009). In terms of trade costs, we may say that the trade costs have a similar effect as ad valorem tax. Anderson and Wincoop have estimated the tax equivalent of ‘representative’ trade costs for industrialized countries is 170%, with transportation costs alone contributing 21% of the tax equivalent (Anderson, Wincoop, 2004).

Thailand’s economic growth has been largely fueled by international trade. Given this dependence on international trade, freight logistics have played an important role in the competitive edge of various industries of Thai’s in the international market. If Thai’s logistics industry is less efficient than other countries, the competitiveness of almost all industries will suffer. However, the degree to which different industries are penalized is different. It is quite obvious that those industries that produce goods with a low value­to­weight ratio will suffer more from the low efficiency of the logistics industry. On the contrary, the industries that produce relatively light products, that is, those with a high value­to­weight ratio such as high­tech electronic products or pharmaceutical products, will benefit more from trade liberalization and are more likely to prosper. In this way, logistics costs provide a way to shape the structure of the economy.

In a similar fashion, logistics costs can also work as framing forces of regional economies. If the logistics costs are substantial in relative to the costs of the goods, the industry will concentrate on places with good logistics infrastructure. On the contrary, if there is a highly developed logistics system available, the industries will be less likely to concentrate on a few regions with favorable geographic positions. So, it is clear that low logistics efficiency will contribute to the emergence of development gaps between developed regions and less developed regions. Let’s take the distribution of agriculture as an example. Since fruits are more demanding to the logistics than rice because they have to be shipped in a more timely way, fruits farming will slowly concentrate on the regions with better transportation infrastructure.

3. Why is Thailand’s logistics costs so high and what is the consequence

3.1 The structure of Thailand’s logistics costs

In order to make a diagnosis to Thai’s logistics system, we need to begin our analysis with examining the structure of Thailand’s logistics costs.

Whereas inventory carrying costs comprise warehousing costs and financial costs, administration costs include compensation of employees in business logistics operation and communication costs. The structure of Thailand’s logistics costs can be seen from figure 2. Although the absolute values of the three components of logistics costs change every year, their ratios are relatively stable. This relatively stable structure of logistics costs reflects the development status of the logistics system. In 2009, transportation costs make up to 49.4 percent of Thai’s total logistics costs, followed by inventory holding costs which have made up to 41.7 percent of the total costs, while administration costs have only contributed 8.9 percent to the total cost (Thailand Logistics Report 2010).

We note that the inventory carrying costs in Thailand constitute a larger component than those in most developed countries, which might imply that JIT approach is very likely less popular in Thailand than in developed countries. The figure 4 below shows the stage of logistics development of Thailand in comparison to other developed economies. Thailand is still in the lowest level of the development process – “the physical distribution” (Suthiwartnarueput, 2007). At this stage, the logistics activities concentrate on the traditional function of logistics – physical distribution – due to lack of advanced technologies and sophisticated logistics practices.

As trucks are more expensive than railroad for long haul transport, shifting road to rail transport as a logistics strategy is worth investigating.

Thailand’s high relative logistics costs have some far­reaching consequences on its economic development. Some might be positive, but many others are negative.

On the one hand, firms in Thailand are forced to compete in those industries producing goods with high value­to­weight ratio in the world market. This impact of the low efficiency of logistics industry might be positive, because these prioritized industries are generally those with high knowledge input and low pollution output. However, if the domestic producers are not ready to play in these high­tech industries, the national economy will lose its competitiveness in the world market.

On the other hand, the low efficiency of logistics industry will result in an unbalanced development in different regions. While some regions can develop more rapidly, other regions will be lagged far behind. The consequences of this unbalanced development are twofold. First, it will have a negative effect on the consumption side of the economy due to the distinctive savings rate between the rich and the poor. What might be worse is that this development gap between regions might lead to political unrest in some regions, which has already been observed in Thailand in recent years.

4. Some recommendations on Thailand’s logistics policies

Based on our analysis, some recommendations could be made to improve the Thai’s logistics system.

Secondly, while the investment in the rail infrastructure overhaul is in the right direction, a more radical institutional reform should be considered. It is recommendable to privatize the operation of the railway to make it more competitive. The reason that firms prefer truck transportation than rail mode is a matter of price. Only when the transportation costs by rail are reduced because of an increase of efficiency, can rail mode be accepted more widely. Therefore, competition orientation must be introduced into the operation of rail transportation.

Thirdly, Thailand should improve its trade structure by balancing the freight volume of import and export. Because Thailand exports more stuff than it imports, more containers are sent out than shipped in. Since Thailand does not produce these containers itself, Thai exporters must pay to have about 1 to 1.5 million empty shipping containers sent back every year. At a cost of about US$ 200 to 300 per container, the transport of empty shipping containers costs Thailand US$ 450 million per annum, which is a big burden for Thai’s logistics system. In order to achieve this goal, Thailand could try to export more high­tech products while importing more raw materials.

Of course, all the proposals mentioned above are just put forward tentatively, and they must undergo more stringent examination before they can be of any practical value.

1 There has been some information revision of GDP and total logistics costs in 2006­2008 in accordance with the National Income in 2010. In addition, the forecast of Thailand economic situation in 2011 by Kasikorn Research Center expects that the logistics cost per GDP of 2011 is still higher than 18 per GDP.

Source: Office of the National Economic and Social Development Board (NESDB) 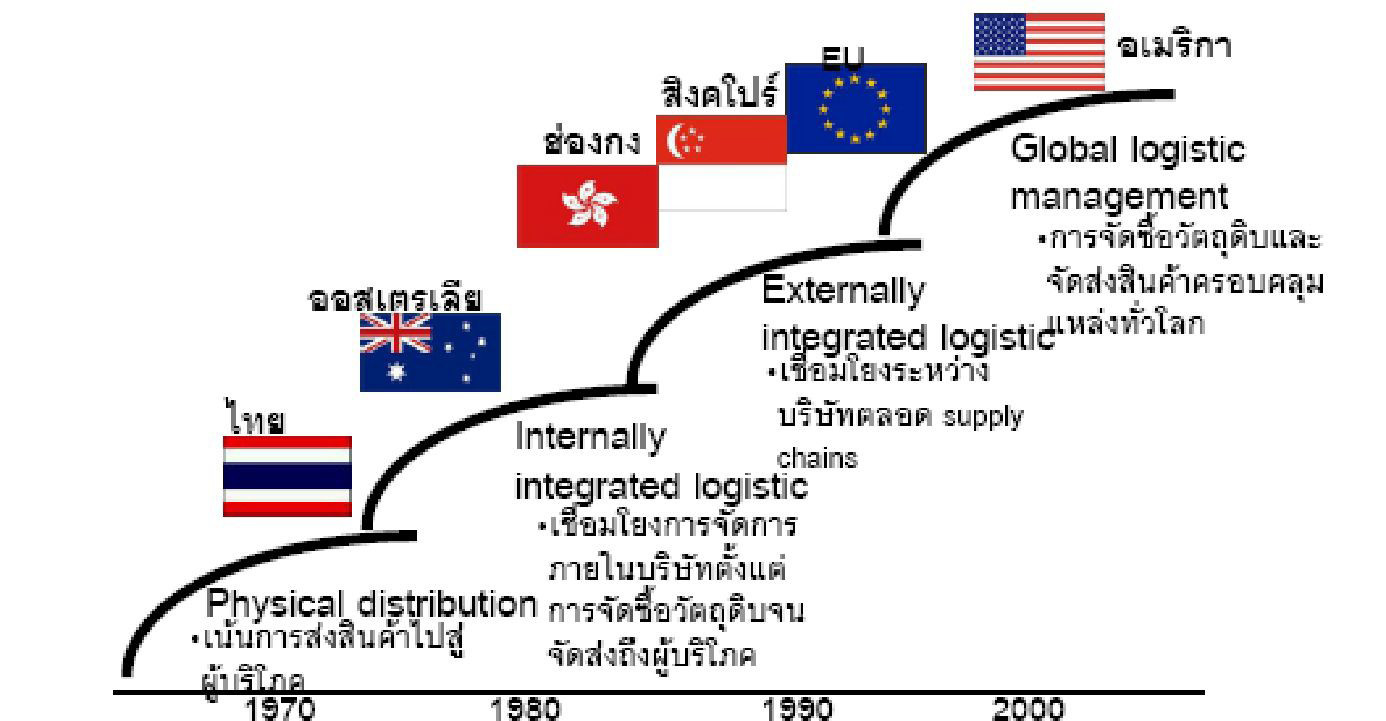 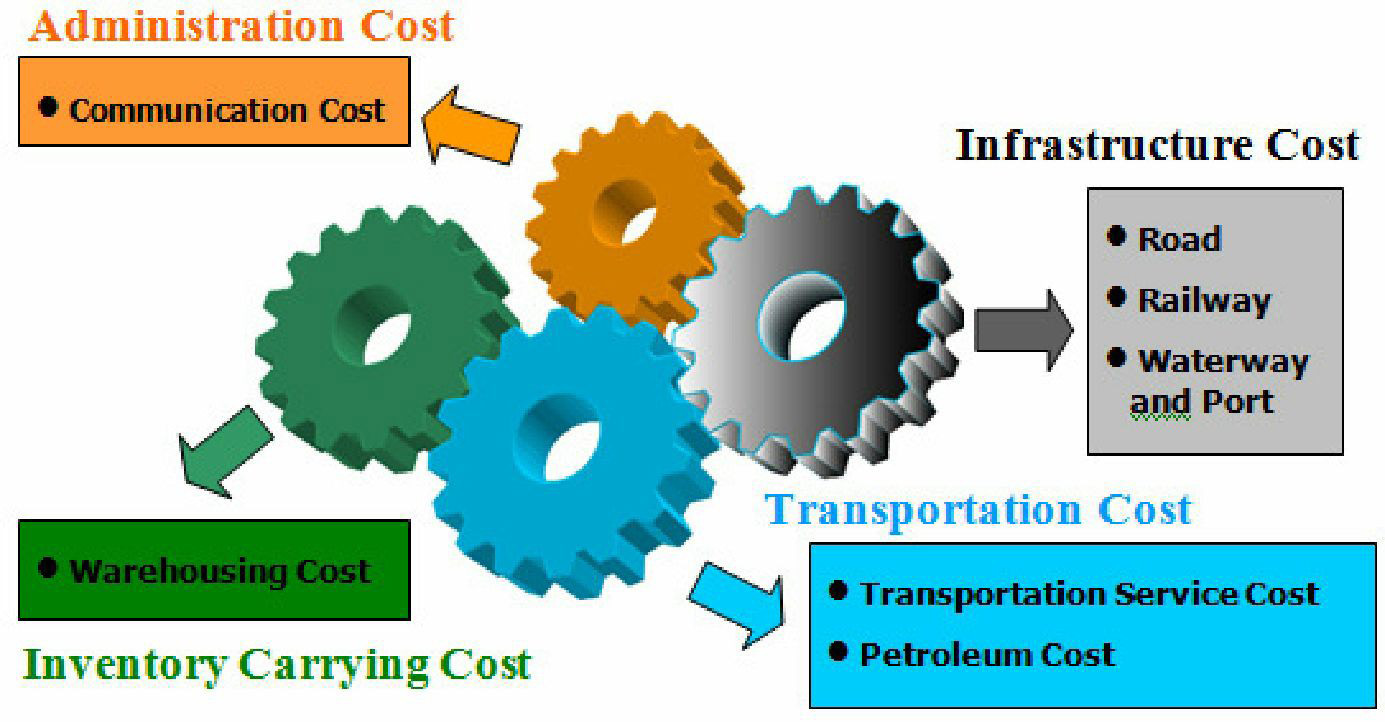 Xiong M. (2010). Lessons for China from a Comparison of Logistics in the U.S. and China. MBA thesis, Sloan School of Management, MIT.