What Does Automation Really Mean for the Future of Work?

In recent years, a loud and lively debate regarding the effects of automation on the future of work has emerged among scholars. The conclusions reached by these scholars generally fall in different buckets along a spectrum of how disastrous the researchers think automation will be for the future of work (on a scale of “not at all” to “entirely”), based on their personal world views. As the paragraphs below demonstrate, this scholarly landscape has led to an overly saturated debate about the topics at hand, causing various positions to become virtually meaningless in the absence of empirical evidence.

Existing literature exploring the implications of increased automation for the future of work generally falls into one of three categories: the optimistic, the pessimistic and the nuanced. This essay section explores the claims made and findings shared within each of the aforementioned categories.

The scholars who take an optimistic view regarding the future of work and automation tend to share a utopian view of the future in response to the advent of further automation, where existing work will either be abolished at no cost to workers or supported by new technologies which will allow humans to work even more productively. The first set of scholars argue that automation will ultimately cause so many human jobs to become obsolete that humans will no longer have jobs to fill in the future. According to Nick Srnicek and Alex Williams in their book, Inventing the Future: Postcapitalism and a World Without Work, such an outcome is not cause for despair, however. On the contrary, with the implementation of widespread policies such as universal basic income (UBI), workers can continue to survive without having to earn their income by working, meaning that machines will shoulder the workload currently carried primarily by humans, freeing up leisure time for humans (Srnicek, 2015). This position is shared by scholars who maintain that via the implementation of sweeping economic policies, policy leaders can prepare society for an increasingly automated future.

A more conservative yet still optimistic view regarding automation and the future of work points to the ways in which technology can support existing work rather than replace it. In his article, “How Human-Computer ‘Superminds’ Are Redefining the Future of Work,” Thomas W. Malone points out that humans and machines are intelligent in different ways. Machines possess specialized intelligence, which means that they are very effective at achieving specific goals, as evidenced by the fact that today’s AI exists as a wide range of specialized programs, not a single general AI that can figure out how to behave in different situations (Malone, 2018).. On the other hand, human intelligence is much more general, meaning that humans are able to adapt and learn new skills with greater ease than machines. As such, machines can never truly replace humans in the workforce, but their different, specialized intelligence can enhance working conditions for humans by focusing on the complex details of certain tasks, while humans can take on a more managerial role (Malone, 2018).

The scholars who take a more pessimistic view regarding automation and the future of work tend to agree with the optimists who argue that society is headed toward a post-work future, with large swaths of existing human jobs becoming obsolete, however, they draw vastly different conclusions regarding the outcomes of said future. The pessimists see no indication in the existing societal set-up that would suggest that workers will be protected in a post-work future, pointing to a rise in offshoring and the existence of large, exploitative organizations which provide poor wages, working conditions and benefits to many of their workers (Ford, 2015). These issues can be largely attributed to rising global competition. Firms’ number one goal remains profit maximization, causing them to seek cheap labor and production methods in an effort to keep up with the aforementioned rising competition (Friedman, 2016).

As pessimistic scholars witness the above-named ongoing trends, they apply them to automation, which provides firms with another profit-maximizing avenue. Automation allows the most repetitive tasks performed by workers to be completed much more cheaply, without concern for human error or benefits sought out by human workers, such as sick leave or vacation time (Friedman, 2016). To the extent that firms can automate, they will, as it makes economic sense for them to do so. Though not all white-collar jobs are immune to automation, automation creates the greatest concern among workers who perform lower-paying or lower-skilled jobs, as these jobs are most easily replicated by machines (Blustein, Kenny, & Diamonti, 2017). As such, the scholars falling into the “pessimist” camp fear that increased automation means increased inequality within society, with the more disadvantaged members of society experiencing the negative consequences of automation at higher levels.

Between the optimists and the pessimists sit those scholars who view automation as neither merely cause for celebration nor merely cause for concern. For these scholars, the effects of automation on the future of work lie somewhere between those proclaimed by the previous two camps. These scholars argue that given the high volume of recent analyses leading their peers to fall into either the optimistic or the pessimistic camp, the debate around the impact of automation on the future of work is shrouded in ambiguity. Given this ambiguity, these scholars still generally support taking some form of action in terms of preparing workers for the future in the face of automation, however, their proposed approaches vary considerably, suggesting that even the nuanced views regarding automation and the future of work fall on a spectrum. For instance, Robert W. Lent, who has experience in professional counseling, suggested that career development experts play a role in helping to prepare workers for the future through counseling sessions designed to help workers choose more future-proof careers or pivot when necessary, by advocating for displaced workers and by participating in dialogues with educational institutions to help transform them (Lent, 2018).

For some scholars, approaches like Lent’s above miss the point. David A. Spencer provides one such dissenting voice in his article, “Fear and hope in an age of mass automation: debating the future of work.” Like Lent, Spencer recognizes that the answer to the question of what automation means for the future of work is not nearly as simple as other scholars who fall into the optimist or pessimist camps make it out to be. However, the answer lies not in how many jobs will or will not be lost, created or supported due to automation, but in the overarching economic system within which we exist. In the face of growing automation, workers face the potential for a reduction in work hours due to the support provided by technology, however the increased productivity driven by technological progress has created pressures that have maintained and/or extended work times due to conditions of consumerism fueled by capitalism (Spencer, 2018). This means that work volumes have not decreased due to automation, however, the quality of existing work has diminished. According to Spencer, the only way to address this issue is by radically reforming society to allow workers a measure of control over the use of technology within their firms, whose primary approach is use technology for profit maximization at the expense of workers (Spencer, 2018).

The existing literature on automation and the future of work lacks deep, balanced analysis of the topics at hand. The conclusions drawn by scholars are largely theoretical and/or based on anecdotal evidence. Furthermore, scholars’ musings on the subjects of automation and the future of work seem to be swayed, at times heavily, by their own backgrounds or political persuasions. The political leanings of the scholars are relatively overt in much of the existing literature. This is not necessarily cause for concern, however, such approaches can lead to cherry-picking in terms of factors discussed and examples used in research. For instance, Malone discusses how humans can use technology to assist them in their daily tasks, taking on a more managerial, oversight-oriented role (Malone, 2018). While such an outcome may apply in the case of cognitive labor, it becomes more difficult to find applications of Malone’s model when it comes to manual labor, which is easily automated and requires minimal oversight. On the other hand, Spencer’s proposed approach of technology collectivization in favor of workers suggests strong socialist leanings, which is not necessarily a problem on its own, however, without strong statistical analysis, it is difficult to substantiate the claims he uses to reach his conclusion, causing his research to remain highly theoretical.

While existing literature regarding automation and the future of work is often biased in various ways, statistical evidence regarding the relationship between technology and the workforce does exist. Take, for instance, the following statistics from the Economic Policy Institute demonstrating how productivity has continued to rise since the 20th century due to technological advancement and how hourly compensation has stagnated: 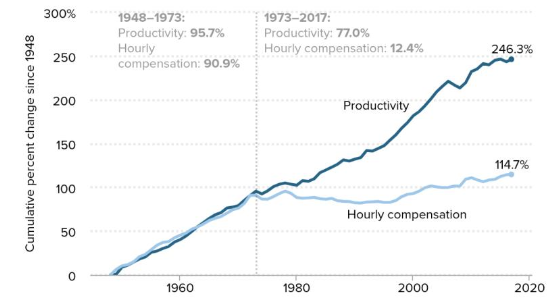 The problem with statistics and figures like those shown above is that it is not always easy to prove causation in favor of correlation without controlling for a variety of factors. Furthermore, we only have past and current statistics at our disposal. While this may make it easier for researchers to identify certain trends, the nature of technology is that it is continuously developing. This makes it difficult to predict the future world which will develop due to the continued proliferation of technology. The only way to model such ongoing growth is through real-time empirical analysis.

Some scholars who have written about automation and the future of work have managed to use empirical analysis in their research. For example, Benjamin Shestakofsky conducted a 19-month long study to at a software firm to test how relations between workers and technology evolved over three phases of the company’s development. The results of the study showed that despite increasingly automating its own processes, the firm opted not to perfect its software algorithms to continuously push people out of the production process and instead continually reorganized to allow humans to work with the software (Shestakofsky, 2017). The study suggests that automation is not necessarily detrimental to workers in terms of making them obsolete. The problem is that it is only one study. In order to better understand the aggregate effects of automation on the workforce, such studies need to be replicated on a much larger scale, controlling for factors such as regional differences, company culture and so forth.

As demonstrated by the above literature review and discussion, the effect of automation on the future of work is notoriously difficult to study, due to the competing intrinsic views held by different scholars studying this relationship and to the lack of data regarding the ever-evolving prevalence of technology in the workplace. The best way to remedy the extant information gap which, if filled, would allow for much more robust analysis of the relationship between automation and workforce development, is to replicate studies like Shestakofsky’s on a much larger scale on a longer-term basis, putting the appropriate controls in place. Only then will researchers be able to reach viable results and translate them into meaningful conclusions about what automation means for the future of work.

Ford, M. (2015). The Rise of the Robots: Technology and the Threat of Mass Unemployment. London: Oneworld.

Friedman, T. L. (2016). Thank you for being late: An optimist’s guide to thriving in the age of accelerations. New York: Farrar, Straus & Giroux.

Srnicek, N., & Williams, A. (2015). Inventing the Future: Postcapitalism and a World without Work. London: Verso.