A remarkable man and a true friend, and mentor passed away on May 9, 2014. Dr. Bernard T. Pitsvada was a man of many dimensions, and he excelled in each. He was born in Burlington, New Jersey in 1933, and attended Temple University in Philadelphia, but he spent his whole adult life in the service of the United States government. He started out by serving 3 years in the Army (Intelligence) in Japan and Korea. He became interested in the business of governing, and when he got out of the Army he obtained a Ph.D. in Government at American University in 1972. Dr. Pitsvada spent thirty years in the Defense Department, mostly in the Office of the Comptroller. Bernie was a master of the strategies and techniques of public finance, but also a noted expert on the broader issues of U. S. foreign policy, and was the author of highly regarded books on both subjects.

After retirement in 1973, Professor Pitsvada moved on to teach Public Administration for almost 30 years at the George Washington University at both the graduate and undergraduate levels. In this role, he was a much admired mentor to numerous students. Many students from China came here to study, and they, too, found Dr. Pitsvada as a mentor. He was extraordinarily disciplined, firm and demanding. At the same time, he was calm, soft spoken and deeply understanding. He had a unique ability to make friends out of potential adversaries. Turning strangers into friends, and making encounters into a positive learning opportunity. The basis of his personality was his high intellect. He read voraciously, thought deeply, and had a real comprehension of the broader and more important political, economic and social tides within our society. He had strong views and opinions on these important issues. And people listened because he knew what he was saying. As a result, he was nominated to serve for ten years on the finance committee of the Army-Navy Club, of which he was a long term member. He also was a member of the Washington D.C. Arts Association, and the treasurer of the Washington Opera Camerata.

Pitsvada undertook another very special kind of mentoring as well. In 2002, he was awarded a prestigious Fulbright Scholarship to teach at the graduate level at the Renmin University in Beijing, China. Later, many students from China came here to the U. S. to study, and their professors back home referred them to see him, and he never failed to help them both academically and personally. Many of his former students came to his final farewell, some of them managing to make it from China.

I was also fortunate to take one of his courses, and Bernie was undoubtedly one of my finest professors. But I was definitely not one of his best students however. In fact, when I took his public administration course, he gave me a C+ for my first term paper. He saw how nonplussed I was after working so hard on it. He told me that, as he put it, “you have a lot of room for improvement: in fact, it is the largest room in the house!” I loved what he taught me, and I believed what he said then, as I have done ever since. He later asked me to be his Teaching Assistant. He helped me generously while working on the final version of my doctoral dissertation, calling me every week to assess the progress of my research work. Though always the great teacher, sometimes his role of mentor became the role of a TORmentor! But I will always be grateful for his care, and his conviction that I was capable of the highest quality of work.

May he rest in peace, and may his legacy endure. 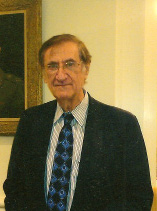